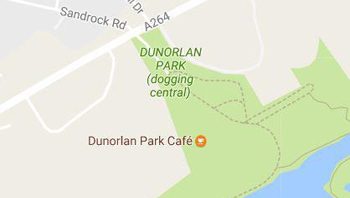 Dunorlan Park is known for being a quiet dog-walking spot popular with families, but sneaky jokers suggested something far naughtier.

The public sex reference in the name of the park in Tunbridge Wells, Kent appeared on Friday morning – but was quickly removed.

Sean Matthews, a transport supervisor at S & S Distribution in Tonbridge, who spotted the name change, said: “We were using Google Maps to route some of our vehicles and it was just in passing that we spotted it.

“We all had a giggle and looked at it in disbelief. It’s something to laugh about.”

A spokesperson for Tunbridge Wells Borough Council said: “Someone has clearly had some fun doing this.

“Most people in Tunbridge Wells will know Dunorlan Park for being one of the lovely parks and open spaces we have in the borough which is very popular with dog walkers.”